Development at Bolstra had slowed for quite a while due to feature creep within a waterfall development process, the transitioning away from an external product team to an in-house one, and the time required to onboard a new development team. Regaining the trust from our users that we still cared about solving their problems was a necessity.
📁 My Roles
UX Writer
⏱️ Duration
~ 1 week
✔️ Key Results
New precedent for release notes, increased opportunity for research recruitment
🏢 Organization
Bolstra, a B2b SaaS startup providing a web-app empowering Customer Success teams to manage their work, standardize & automate processes, and scale their account strategy.
🙋 Stakeholders
Internal Customer Success team, existing userbase

Bolstra's product had been outsourced to and built by a shared expense R&D firm called NorthQuad, which also acted as the product division of another local company, Lumavate. About a year into their relationship, NorthQuad had built a product of somewhat remarkable complexity given the short period Bolstra had been operating. The decisions that made it up had been decided mostly through back-and-forths between NorthQuad and the Bolstra sales team. By responding to pressures from the pre-sales process, they had been able to churn out new functionality very rapidly and begin to gain sales traction.

As time went on, the shared-expense model that Bolstra, NorthQuad, and Lumavate had been navigating became less tenable. Lumavate was growing fast and negotiating for more of NorthQuad's resources. Eventually, it was decided that NorthQuad would be merged into Bolstra and Lumavate (mainly the latter), but unfortunately not before development for Bolstra had slowed to a crawl in the final few months.

The Context of the Release

The Account List had been intended not only as a browser for accounts, but as a place for quick top-level overview. Insight garnering without having to run complex analytic reports. It was also an area that featured heavily in sales demos within the talk track of portfolio management. It was an area of the product that had never had the benefit of early generative research or usability testing and as such it made for a rich place to revamp and expand with all the crucial insights that come from taking the time for research. 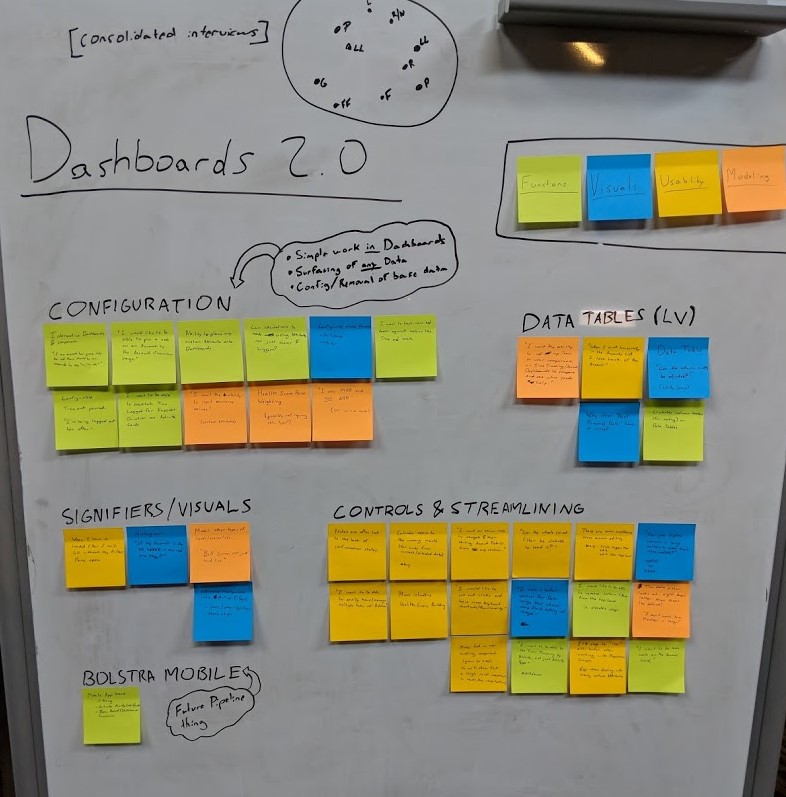 Contextual inquiries I'd conducted on the area in the past, a user-survey including card sorts and ranking exercises, and an array of follow-up interview sessions to dig deeper on survey results granted a good enough insight into the problem space to start throwing together prototypes to test and continue refining. 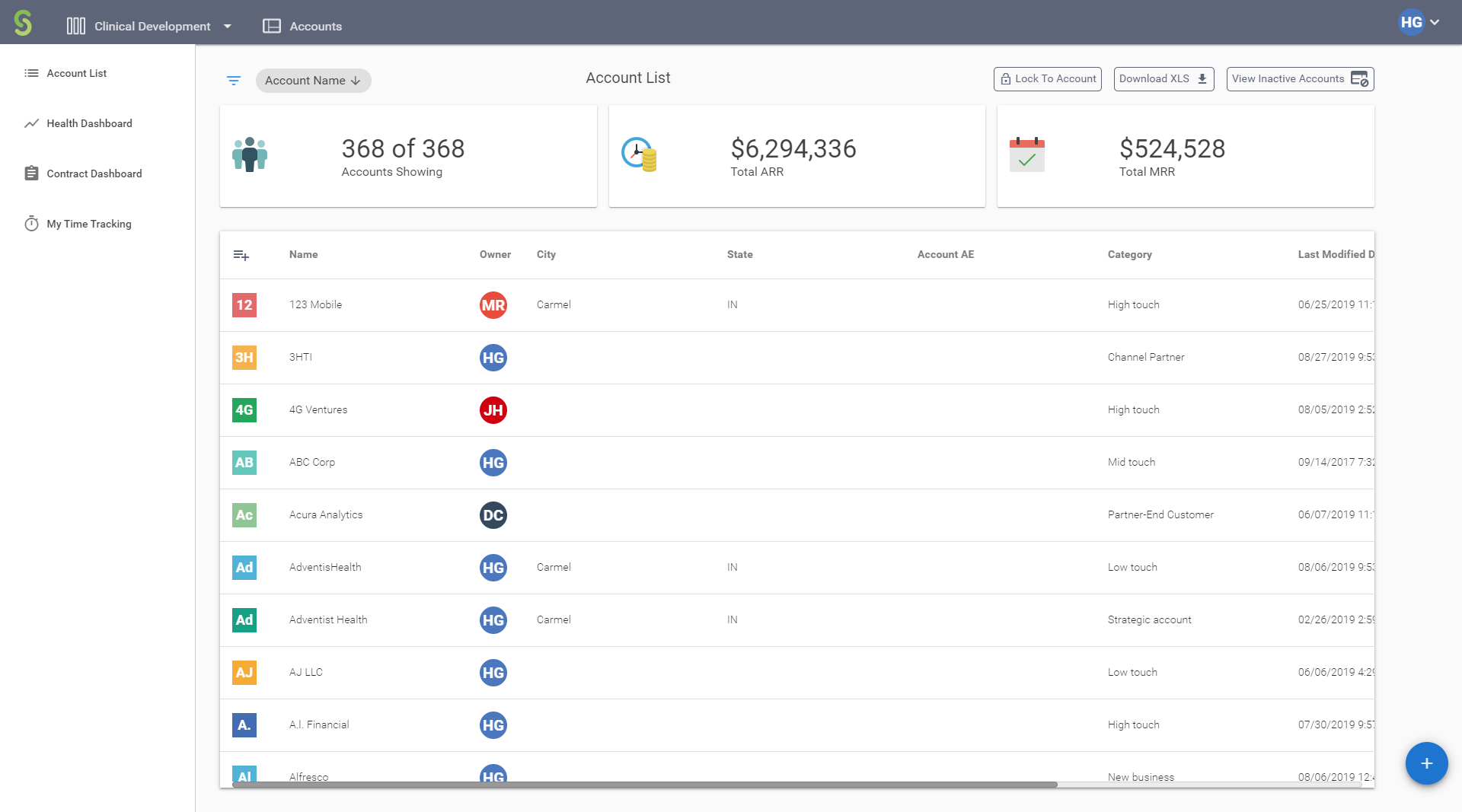 On the interaction design front, kicking the project off with some simple heuristic audits gained us a lot of ground on early prototypes. The old Account List and accompanying dashboard threw red flags in a variety of areas, many of which were fixed by finding ways to add labels, be more space-efficient, and generally cut down on clicks. A particularly painful clickstream from the original involved five clicks (starting from clicking on an unlabeled icon) simply to add a single column to the list.

The ability to sort on custom data in the list was limited only to the Account Name itself, and while custom data could be filtered on, the current state of the filter was never clear enough for comfort among our users. ARR and MRR were both reported on despite our users only using one or the other. The list went on. 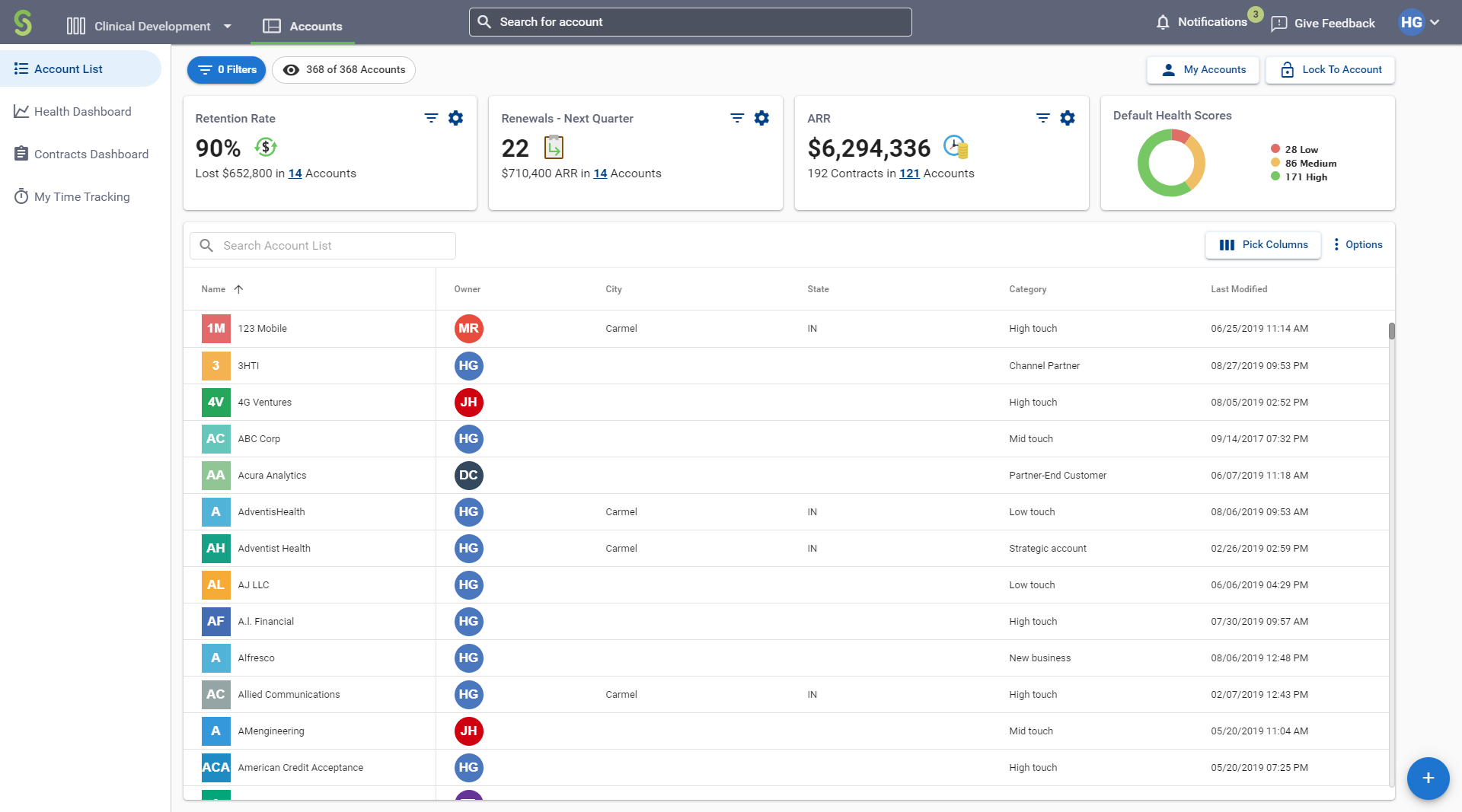 A number of prototypes later we'd turned those aggregate tiles into far harder-hitting insights. They were configurable to solve for things like the desire to see ARR as opposed to MMR. They interacted with the filter itself to allow for drilling down and efficiently taking action in response to a given status.

A note from the Product Team

It's been a while since Bolstra's last major update, however, the development team has been hard at work not only architecting this most recent update but making technical investments in the infrastructure that lets Bolstra function.
‍
Those are going to pay off in a variety of ways, but all center around providing you a faster, more usable, and more dynamic experience. Doing this gives our development team readier access to newer technologies like those behind our updated healthscore visualizations. Operationally, these investments provide us a streamlined process for rolling out updates. The best solutions require iteration to realize fully, and this new process lets us manage that iteration far better. We're particularly excited about the new release cadence this effort has allowed us to achieve. Going forward, you can expect to see major new functionality and improvements every month!

We measure the success of Bolstra updates not merely by whether we're shipping new features, but by how effectively we're helping you solve meaningful problems. To that end, we'll be building in even more time to solicit your feedback and put our designs to the test in every cycle of design and development.
‍
Now, on to what's new!

The new data-tiles surface more relevant information and tie right into the filtering system so that you can jump directly to your most important work. They also add configurability so that you can choose the metrics you care most about in the time intervals you operate within.

The Health Dashboard not only improves on the value of the previous healthscore distribution but adds insights into how things are trending and the ability to see all healthscores in one location. Encounter a spike in overall account health? Get alerted to it here and then drilldown for the full story as to why.

We've rebuilt our list-view component with all sorts of new superpowers designed to make it more interactive and easier to use. This includes click-to-sort and drag-to-reorder columns, a search box which queries text in any column, a dialog that makes it easier to read long notes, and pinned columns so that you never lose the context of which Account you're looking at.

Better history, readability, and editing on all healthscores 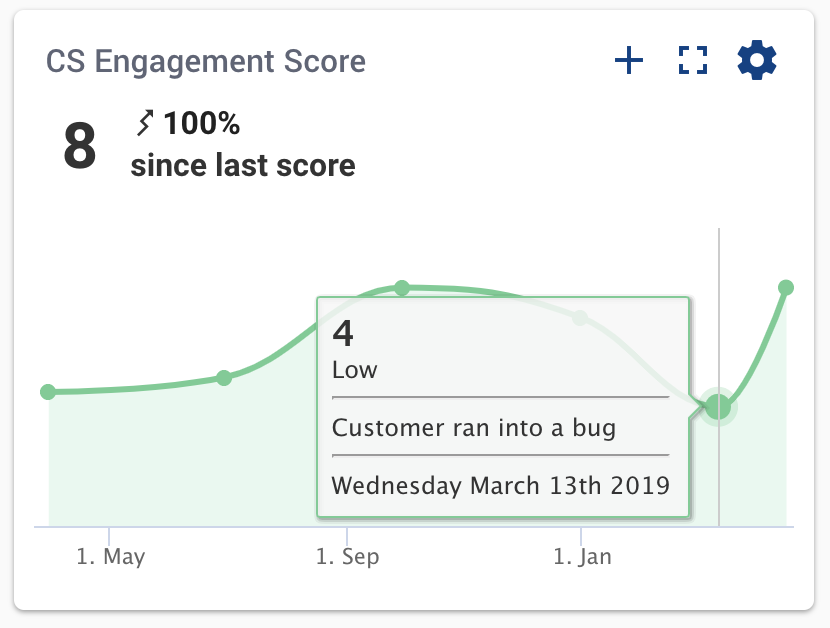 Our new healthscores automatically calculate trend data for you, display notes in the context of scores themselves, and can be made fullscreen to dive into their full histories. Browsing from the Health Dashboard? You can add and update scores from there too!

We want to hear your feedback!

We can't wait for you to take these updates for a spin. We'll be rolling out the update after business hours tonight. We don't anticipate any system downtime from the update, but if you're logged in when we push the changes you may need to log out and then back in before you'll see them.
‍
Let us know how they're working for you via email or the new feedback form accessible in the upper right corner of Bolstra.

For a more detailed breakdown of functionality, make sure to take a spin by the Knowledge Center. Release notes and changelogs will be documented there moving forward, as well as sent out to you.